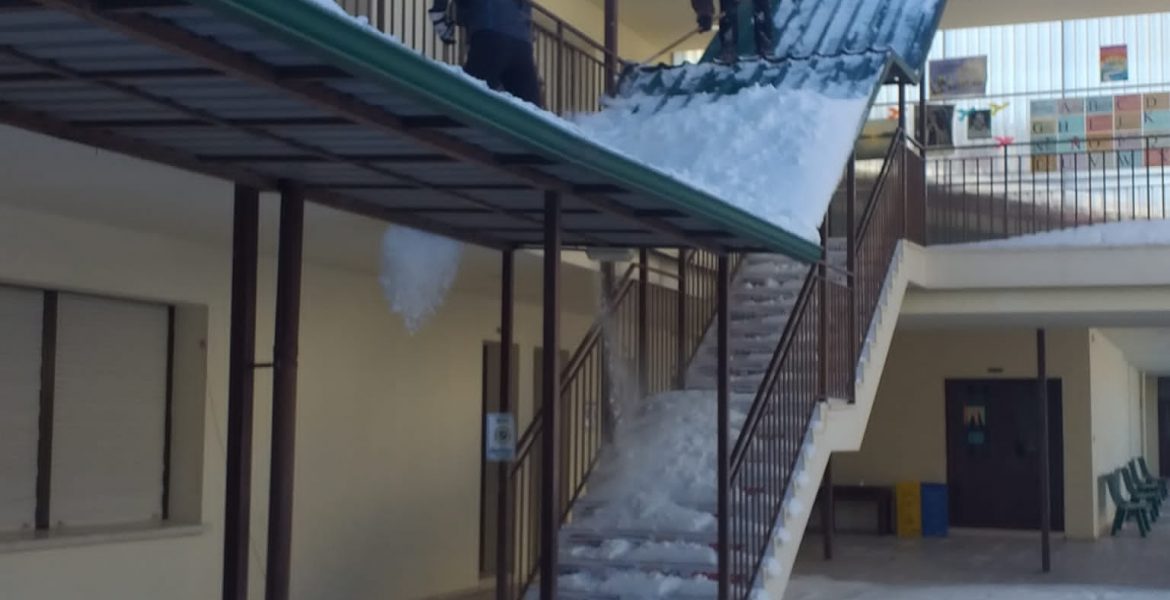 Let's be honest, nobody in Madrid believed that "Copious snowfall of the century" announced for January 8, 9, 10 was to be "So copious", I was going to leave Madrid white, very white and… very stuck.

The first flakes fell on Thursday 7. At around 11 in the morning, from the window of my office, I saw the precious flakes that reminded me so much of my years in Santa Lucía de Gordón in León. By the way, it was a very rewarding memory.

To my surprise, the park that can be seen from my window was covered with snow in less than half an hour. Well, I thought, it's dirt and grass and there's no one walking around. I ate enjoying the landscape and the peace of the falling snow and went out to see the street. The snow is very beautiful, but we know each other a little. I picked up. I removed all the snow from the car, which was no longer little, and I came home, to Perales del Río, to school. When I arrived, it was no longer snowing. Ugh, it wasn't that bad!

I stayed in Perales on Friday for prudence, although I thought I was being a bit exaggerated. Again around eleven o'clock it began to snow, and to snow, and to snow…. and the whole patio was dressed in white and also the street that leads to the school. So it was, persistently, gently, snowing all day. Already in the news there was talk of people who had gotten stuck at M 30, 40, 45 ..., in the middle of main streets of Madrid ..., drivers who returned home after working hours needed help.

And it continued to snow at night, and also on Saturday. And everything was white, and everything, it was collapsed. All of Madrid, city and autonomy!

The snow, stronger than COVID, locked us at home.

The school chats began to smoke on Saturday, as did the heaters in all our houses. You will not be able to go to school on Monday: "Guys, stage 3 is activated". You have to check that all classrrons of each class and each subject are active. The schedules will be followed as in school, one class after another, notify the families. Special touch for those who had not yet responded to the clasrroon. On Monday the 11th, with the autonomy of Madrid collapsed, classes closed until Wednesday and our school overflowing with snow, at eight thirty in the morning, as if it were not with us, we began, online, the second quarter of this course. There was no need to wait for Wednesday. All week we have followed the classes and meetings online and covering, in person, the pipes that the ice was bursting.

But how long were we going to be like this? It no longer snows, but the temperature has dropped to minus 12 degrees and everything has frozen. We have cleaned some galleries, but there is more and more ice and we are not so young anymore.

Finally Antonio Martín, the director has been able to leave his house and get to see the Cole "in situ". A decision has to be made: Ask for help from the center's workers and parents so that, with shovels and whatever we can, we get together on Saturday morning to make paths so that the students can get to their classrooms.

The answer to SOS is indescribable. From half past eleven people began to arrive with utensils, no hands in their pockets: shovels, picks, hammers,…. a lady even brought the tray from the oven; and all together, under the direction of Antonio, the director, and Pilar Silvero, the administrator, they began to open paths between the soft snow and the pure ice that was hidden under such a white layer.

There was laughter and camaraderie, but all together, as if they had been doing it all their lives, fathers, mothers, grandparents and grandmothers, teachers,…. Paths were made so that the students can return to the center next Wednesday.

It was sunny, but how cold it was! Well, nothing is improvised outdoors in a small cafeteria. There is not much, but the coffee or tea is warm and is appreciated.

I do not know how to transcribe it better, but it is clear that there is no evil that, together, we cannot overcome. Sometimes it takes an extreme situation to get our best yo that builds our best US.

Thanks to the educational community of the “Santa Teresa” school in Getafe for making visible the value of unity, fraternity, joy, dedication…. THANK YOU. Holler Box
CARMELITAS MISIONERAS uses its own and third-party cookies to analyze your browsing habits, which allows you to obtain information on which sections arouse your interest and allows you to improve browsing through our website and your security. Click here for more information about the Cookies Policy. You can deny your consent by clicking the REJECT button. If you click on the ACCEPT button, you will accept the installation of cookies and only then will they be implemented, alternatively, if you click on CONFIGURE you will access the privacy summary where you will find more information and you can configure or disable cookies at any time. This banner will remain active until you execute any of these options Cookie PolicyOKReject