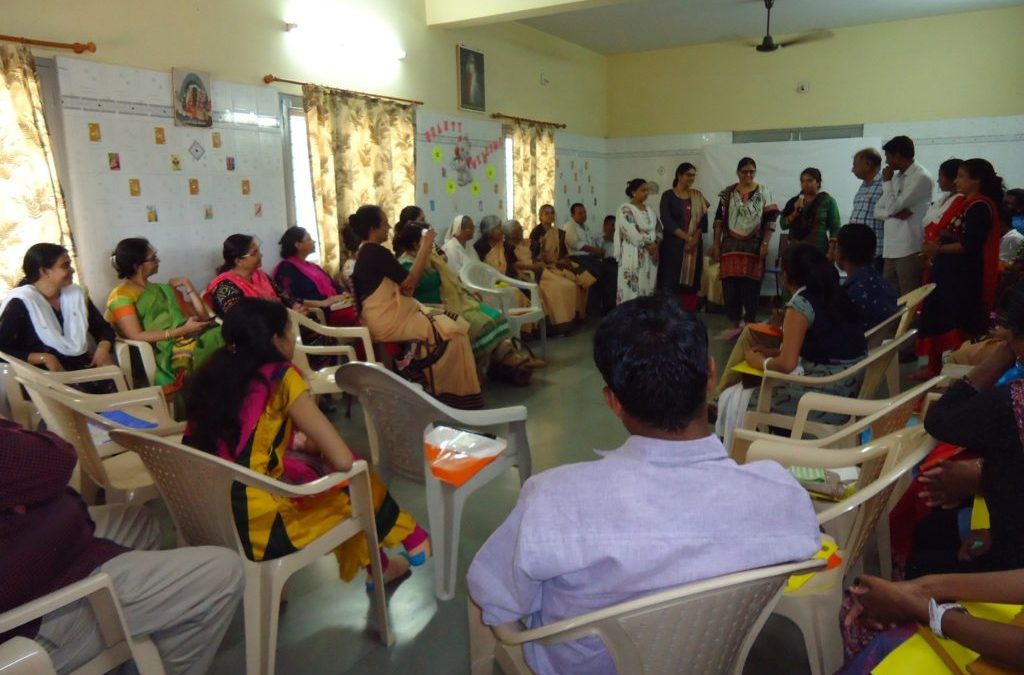 THE NATIONAL ASSEMBLY OF CMS INDIA- 2019

On 31st of March, in Pushpalay community (Santa Teresa del Niño Jesús) Salun, Gujarat, the National Assembly of CMS in India was held for the first time. There were 8 CMS from Junagadh (North Gujatat), 2 from Ahmedabad (The capital of Gujarat), 3 from Mumbai (The capital of Maharashtra) and 19 from Dediapada (South of Gujarat). It was like a group Babel. Because the group from Mumbai does not understand Gujarati and the group from Dediapada does not understand English. Therefore the assembly was held in two languages (English-Gujarati) simultaneously.

The session began at 9am with the lighting of the lamp. Our Provincial Sr. Marykutty Mathew and CMS representative from each group lit the lamp. Sr. Shiny Thomas the in-charge of the CMS group of Dediapada, conducted the prayer.  After which our Provincial spoke on the importance of being a CMS and motivated them to partake in the mission of Christ by accepting and living the Charism given by our Fr. Francisco Palau. She also gave the message of the Holy Father to the laity in order to be active in the parish.

The photos of the CMS from different countries were shown to them in order to encourage the participants as majority of them were just the beginners. After a short break, Sr. Fiona D’ Cruz, in-charge of Mumbai group conducted a ‘game’ so as to divide them into four groups and for getting to know each other. They introduced themselves very creatively. It was time for the Holy Eucharist, so we proceeded to the parish church ‘The Divine Mercy shrine”.

The Holy Eucharist was celebrated by the Parish Priest Fr.Ambrose Dabhi and Fr. Piyush Parmar SJ During the Mass the two of the CMS from Mumbai made their promise for the first time and the 6 CMS from Junagadh renewed their promise. Our Provincial Sr. Marykutty gave each one of them a copy of the statutes and the emblem. After the Mass we felicitated them by cutting of the cake which was followed by a lunch.

Many of them expressed that they learned a lot from each other. They want to be committed seriously and begin some activities for their own people and wish to inspire more members to the groups as well.  They want to meet every year at different region in order to learn from each other and promote communion.

Over all it was very enriching experience for all the CMS and the sisters of the groups. We are indeed inspired and encouraged to be committed in transmitting the Charism of the founder.